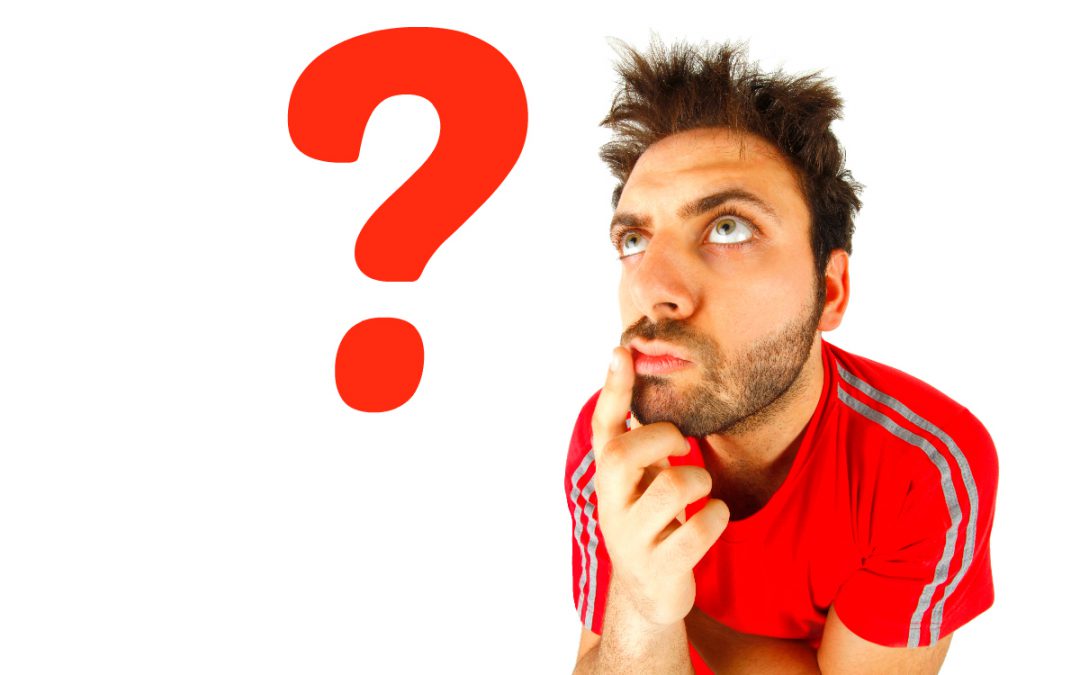 By Marius Alexe • Analysis of Market Behavior • No comments 196 Views

More than 100 years ago, Charles Dow, the editor and founder of the Wall Street Journal, formulated six key tenets of market behavior. Dow didn’t mean these observations to form a coherent theory or, let alone, the basis for an evolving field of study; but as it came out, the six key tenets were so important to the study of markets that they got to be called the “Dow Theory” and ultimately ended up forming the very foundation of what today is known as the field of technical analysis – or analysis of market behavior. 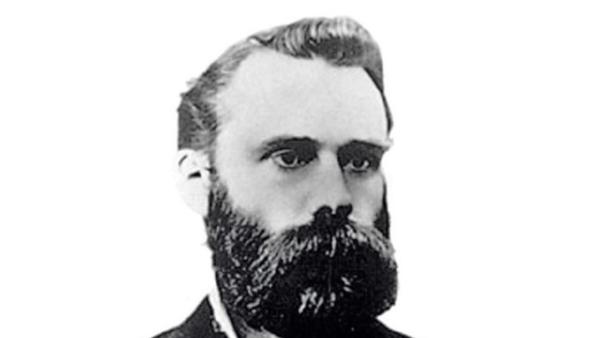 Two of the Dow Theory tenets are:

Averages must confirm each other

Dow suggested that if an economy functioned well and a stock market was robust then the Industrials and the Transportation averages should move in sync – on the premise that if the economy was firing on all pistons goods are both produced and transported.

Volume must confirm the trend

The flow of money in and out of the stock market must confirm the direction in which the market is headed. An advance developing on expanding volume – and in the case of futures contracts, on expanding open interest – is a very different development from an advance developing on declining volume or declining open interest. The basic idea is that if the trend is strong enough to continue, it must be able to generate trading interest in its direction.

Interestingly but not surprisingly, the entire field of technical analysis evolved to place an unusual level of importance on the principle of confirmation and divergence. Technicians continuously scrutinize markets, sectors and industries to understand how breadth and flow confirm the trend or fail to do so; how related sectors and industries confirm each other or not; how different styles (growth, value, dividend) and sizes (mega, large, mid, small, micro-cap) perform relative to each other; how new price extremes deliver momentum confirmations or momentum non-confirmations. We do not do these things just to look fancy or pretend we work. Ultimately, these numbers and indicators reflect the balance of supply and demand for certain financial assets as it results from a combination of market fundamentals, availability of return and investor risk appetite. The most important thing to predict future asset prices is understanding the current and the projected state of that supply and demand balance.

I understand and appreciate the fact that a lot of folks believe in the quick turnaround from the pandemic situation. Incoming technical and economic data is not supportive of that at all – in part because it is all diverging.

Consider the major indices. The more speculative Nasdaq 100 is approx. 3.7% below its January all time high. Meanwhile the broader S&P 500 and the mega cap Dow Industrials are approx. 13.15 % and 17.07%, respectively, below their corresponding highs. For the Nasdaq 100 and the Dow Industrials, the 5-day Volume rate of change has declined ON EVERY LEG UP since the march lows, suggesting advancing phases are generally occurring on declining volume, a bearish (negative) development. 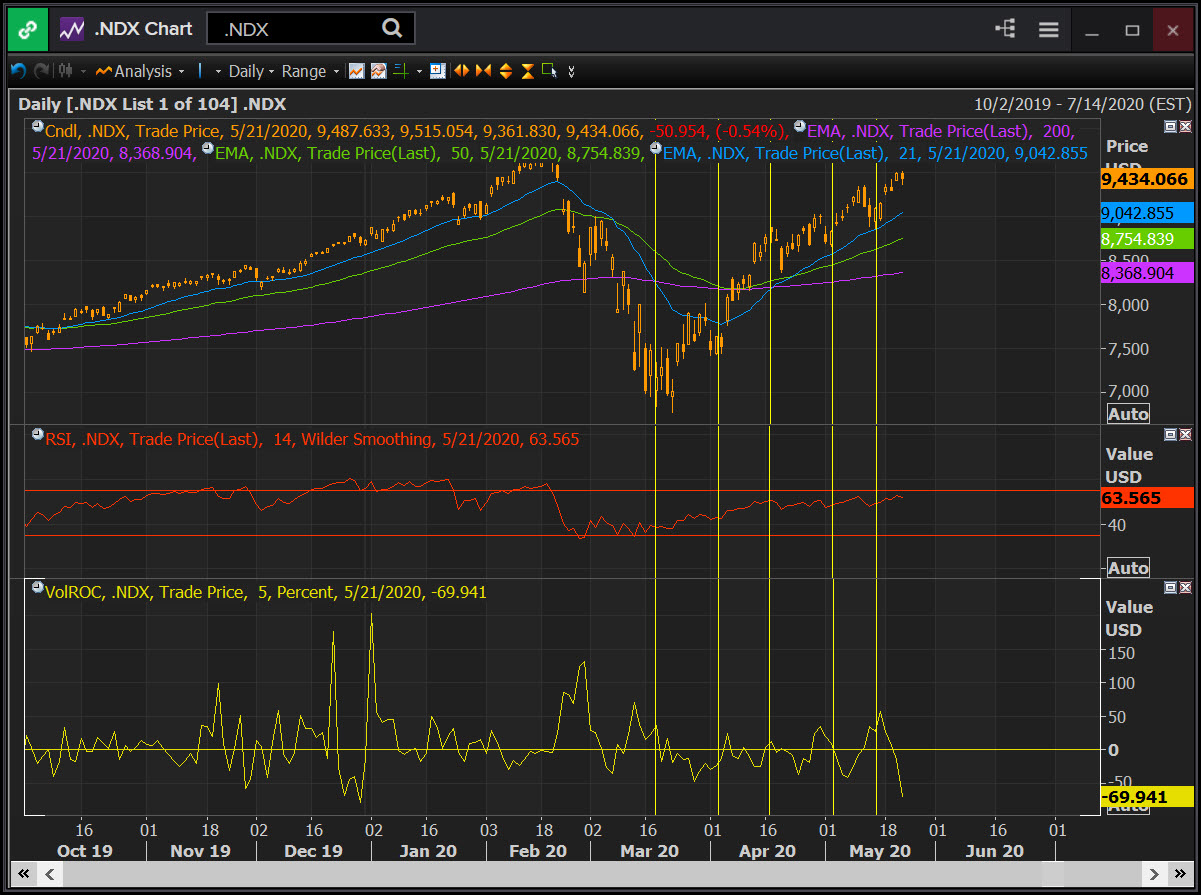 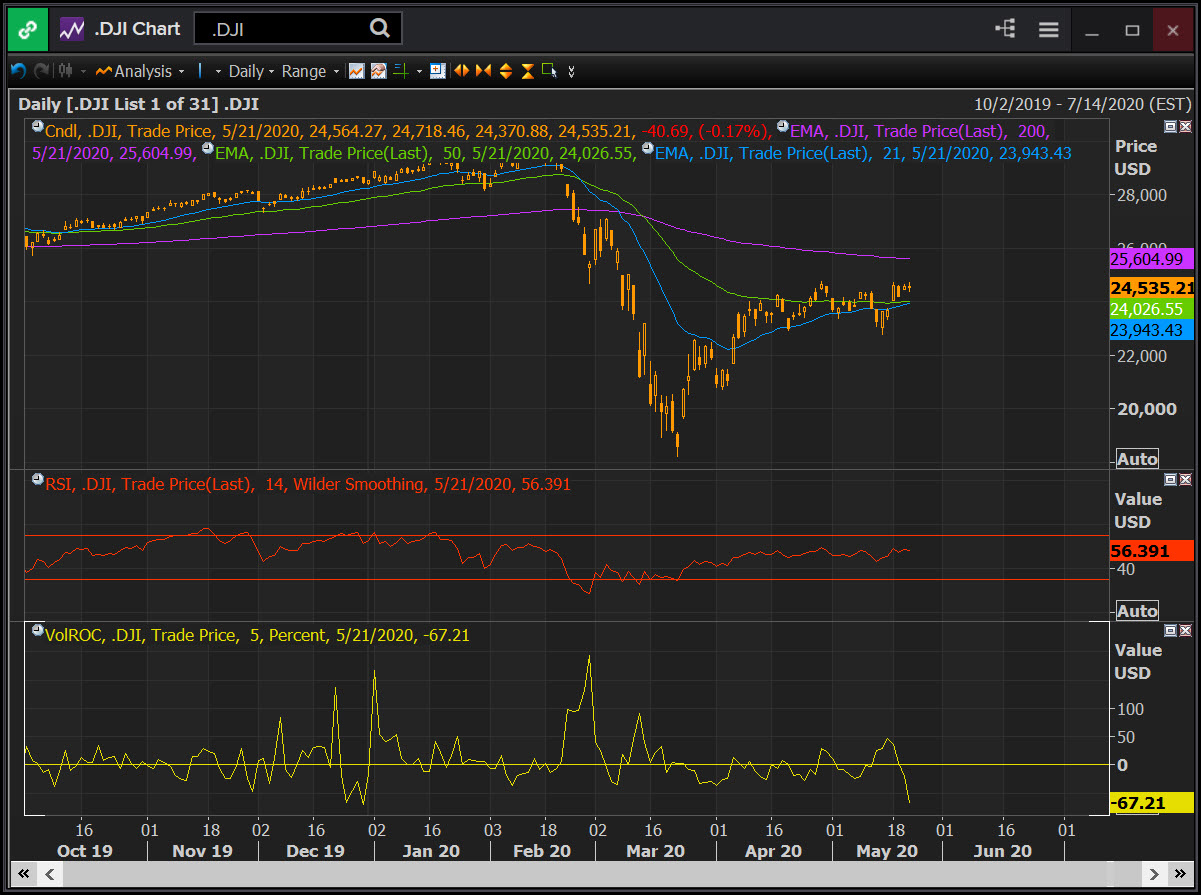 Likewise, the level of activity in the major Index futures contracts is, for the most part, contracting. Here are ES / E-Mini S&P 500 and NQ / E-Mini Nasdaq 100 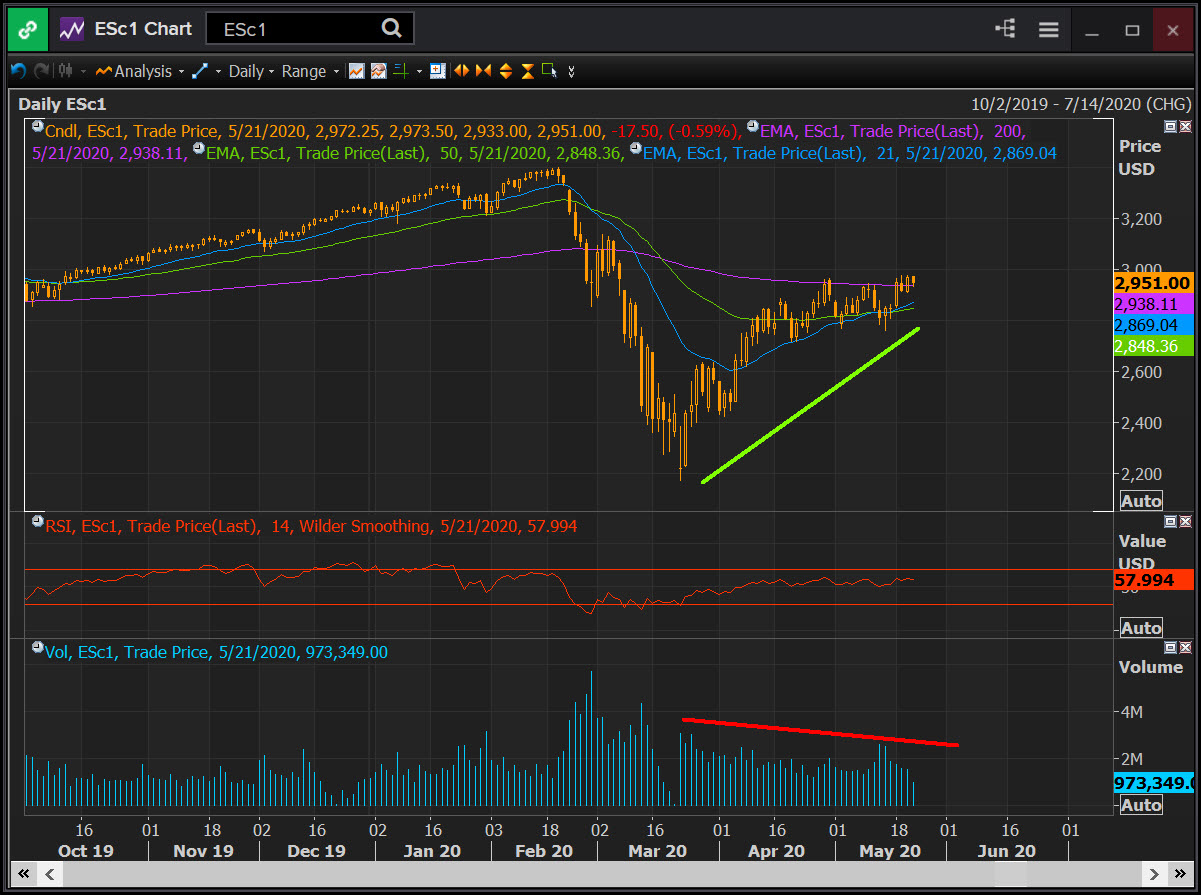 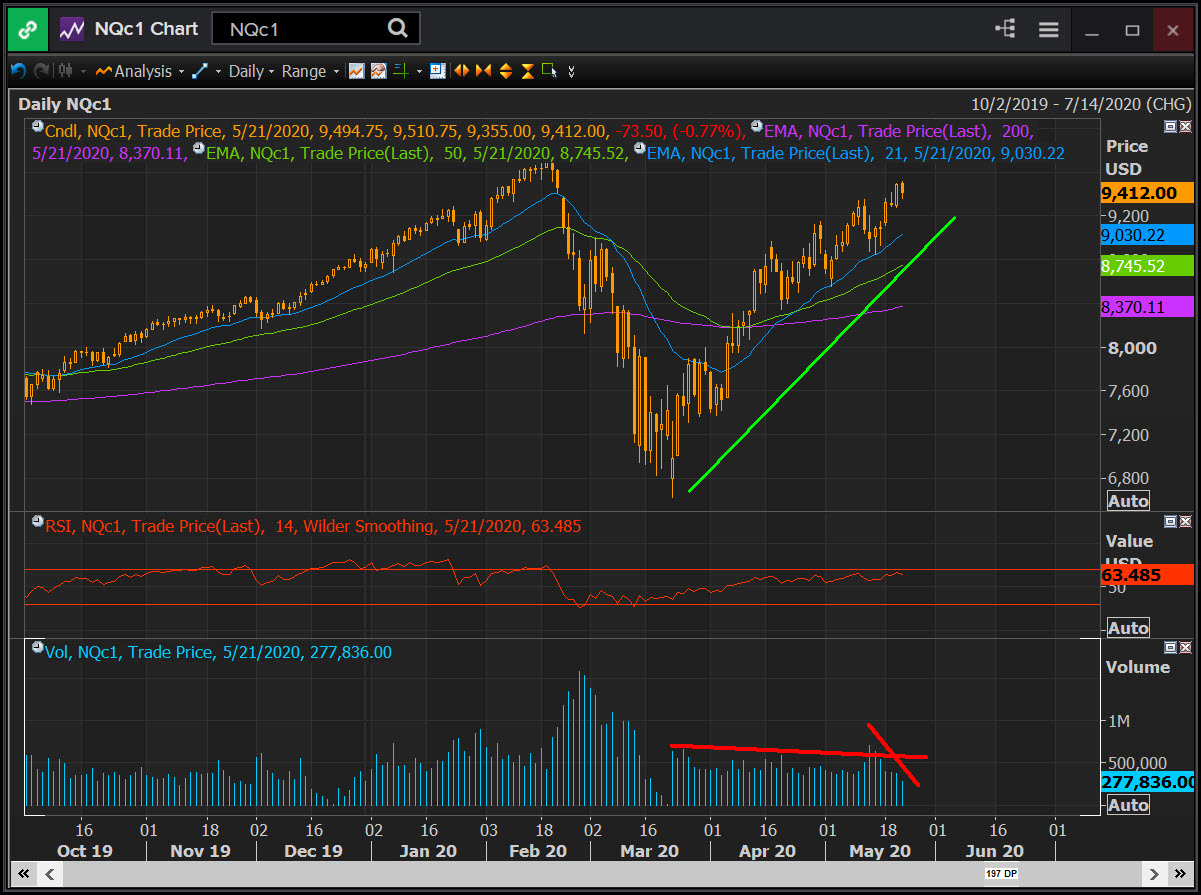 The peak upside momentum for the recovery has been recorded on April 14th for Nasdaq 100, April 7th for the SP500 and on March 26th for the Dow Industrials. Every successive price peak after those dates developed on declining upside momentum, a situation we would read as bearish. 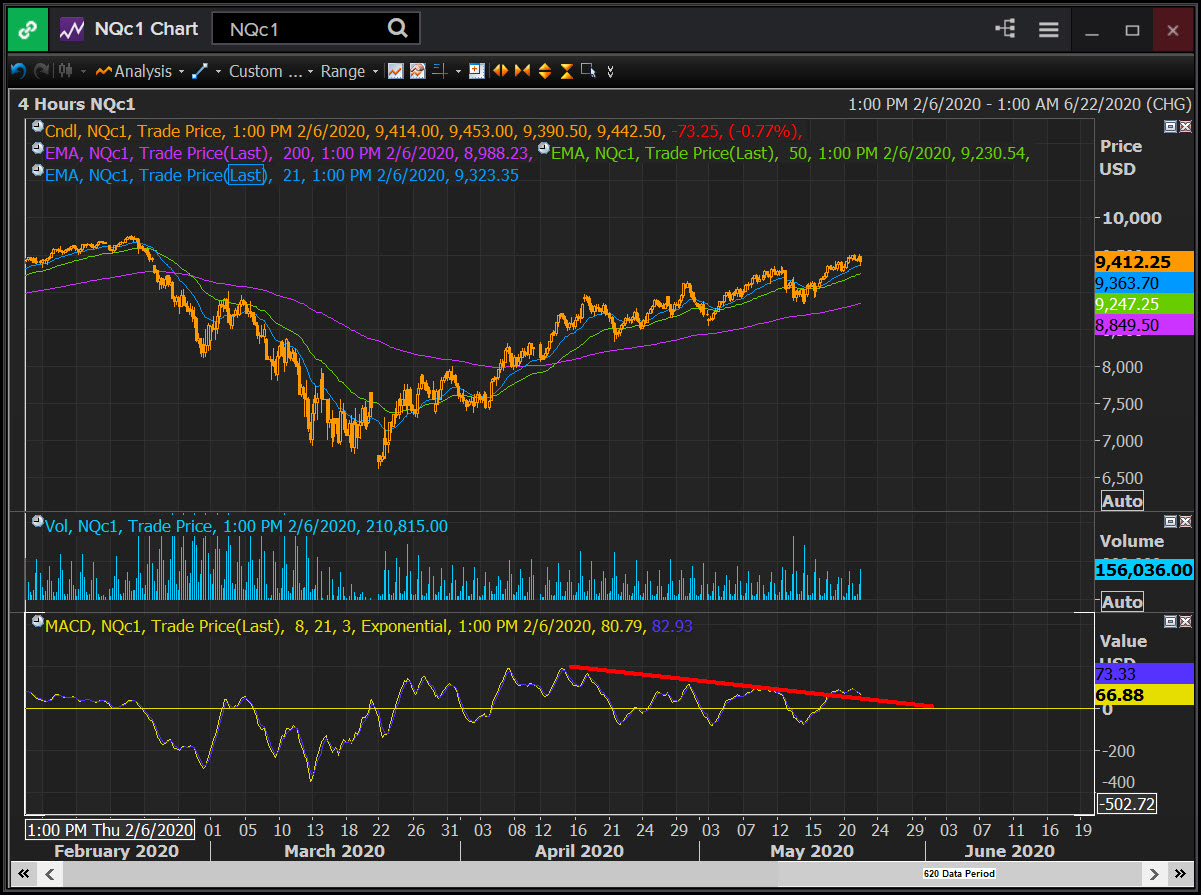 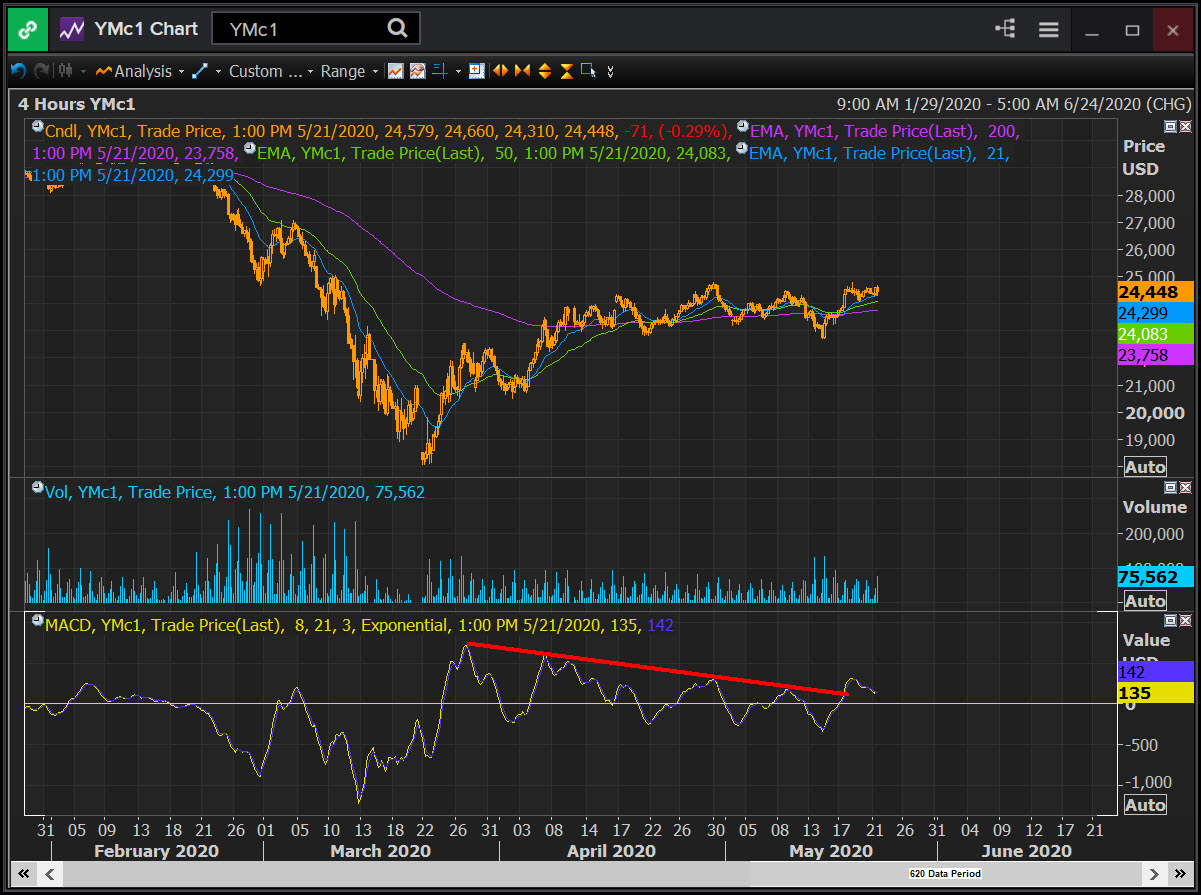 Valuation and sentiment, on the other hand have just gone off the chart. The sharp rebound – which as we have shown appears selective and as of late technically weak in terms of money flow and momentum – has led to some pretty outrageous valuation numbers: 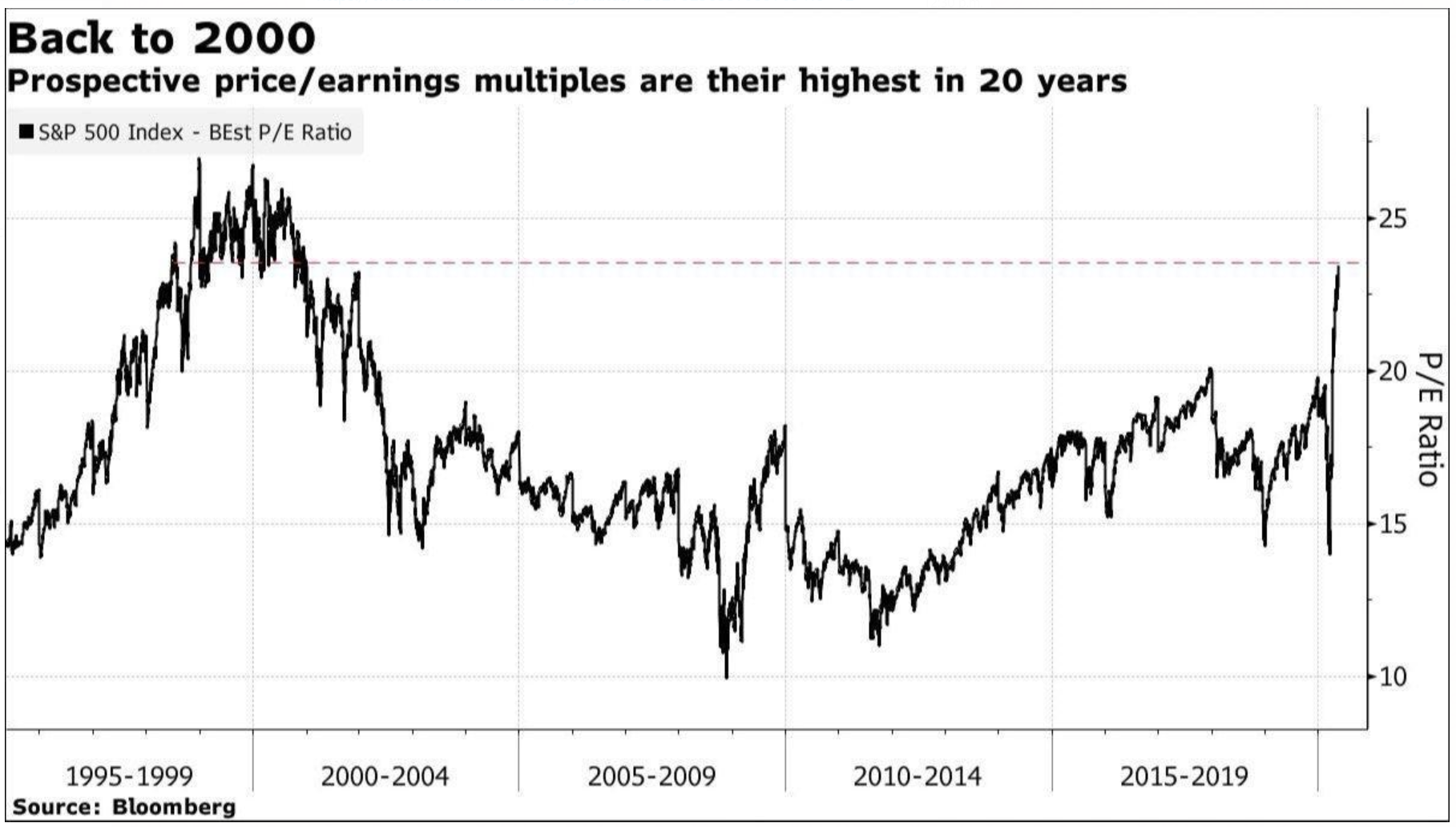 Meanwhile small trader bullish sentiment is going off the chart. Sentiment Trader reports that small trader net bullish open option strategies commitments are at a major extreme. These in essence are speculative bets small traders are making in highly leveraged fashion on the idea that the market will continue to rally. Generally, small traders are not the sharpest segment of the market so the fact that they just went all in placing aggressive option bets on a continuing market rally is a very powerful contrarian indicator. The sheer sense of urgency and the implicit FOMO – fear of missing out – attitude in the face of absurd valuation and deteriorating technicals can be viewed as nothing but the kind of one-sided psychology that generally develops near turning points.

In appreciating the current wave of enthusiasm and how ill placed it really is, you must recognize something else. Much of the risk appetite is fueled by the belief that the FED is going to be on the other side of every trade. This can be very easily proven false for corporate bond purchases but even the current pace of Treasury purchases seems to suggest that something else is happening. 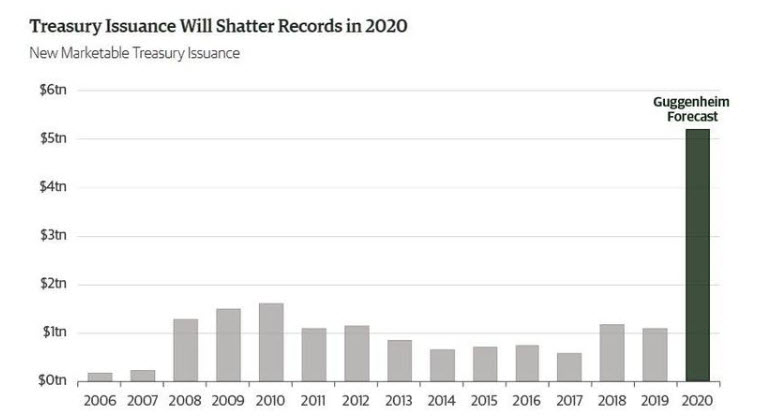 Guggenheim forecasts 2020 will shatter all and any previous records in terms of Treasuries issuance at just over 5 trillion dollars. In late March the FED was buying Treasuries to the tune of 75 billion a week which is roughly 4 trillion a year. That amount has now been reduced at 30 billion a week which is equivalent to approx. 1.5 trillion a year. The bond market, which as you know I keep reminding people is a strictly professional market and thus very smart, sophisticated and in the end very good for predictive purposes, senses possible issues with the financing gap. If the FED is buying only a portion of the Treasuries put up for sale, the rest becomes floating in the market and pressures yields higher. But the maturities where the FED buying is concentrated – 10 Year – would obviously see their yields more depressed due to the inverse relationship between bond prices and bond yields (increased FED purchases drives prices higher and yields lower). This mechanism has just lead to what we view as a major breakout to the upside in the 30 Year / 10 Year yield spread which in our opinion is a major issue for the precious metals market. 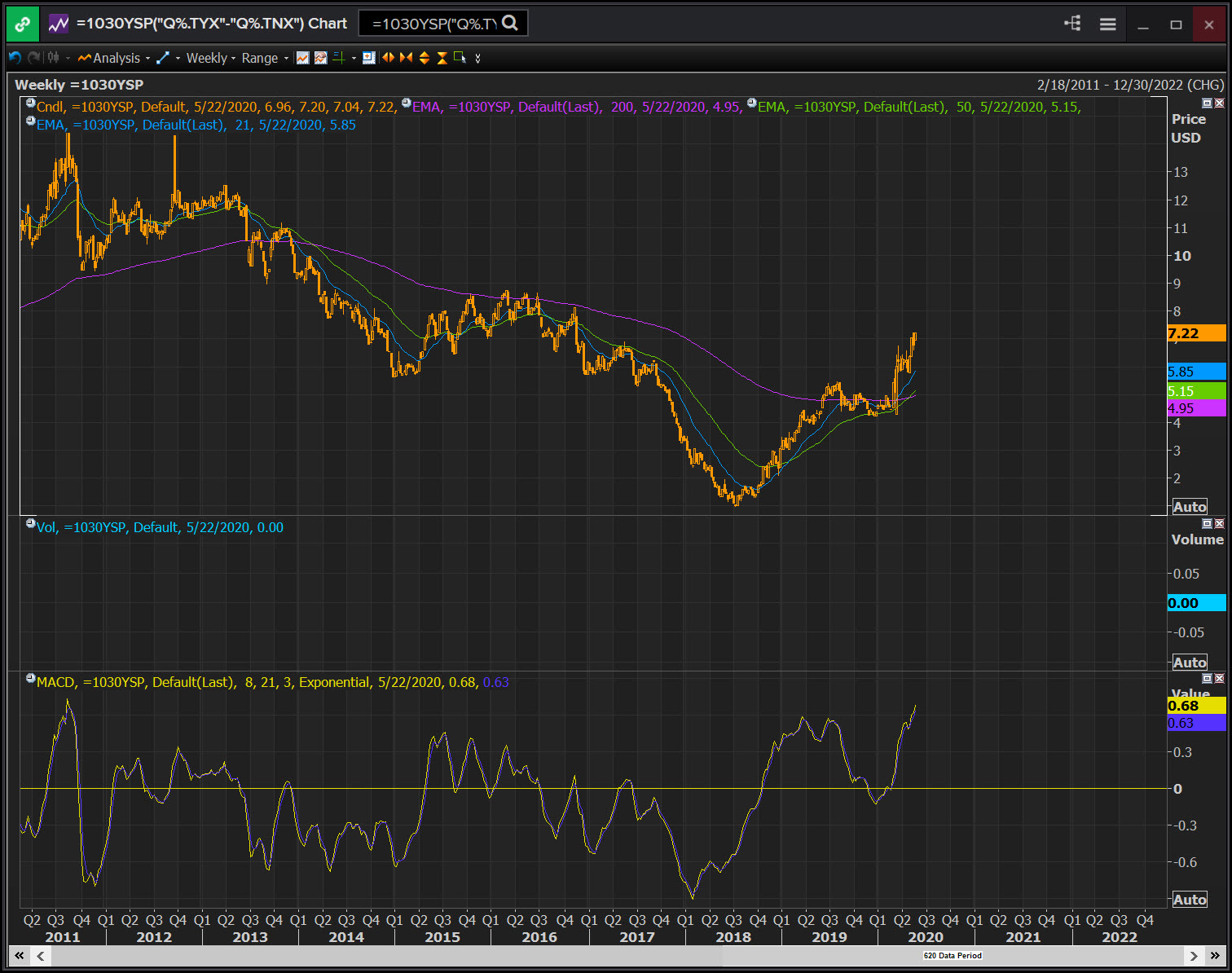 In our view the financing gap and the approaching wave of defaults given the record unemployment in the aftermath of the pandemic are major DEFLATIONARY not inflationary forces in the short run. Because of this we remain very unconvinced that stocks, bonds or metals purchases will do much if any good in the end. Our posture will remain defensive for now …….. 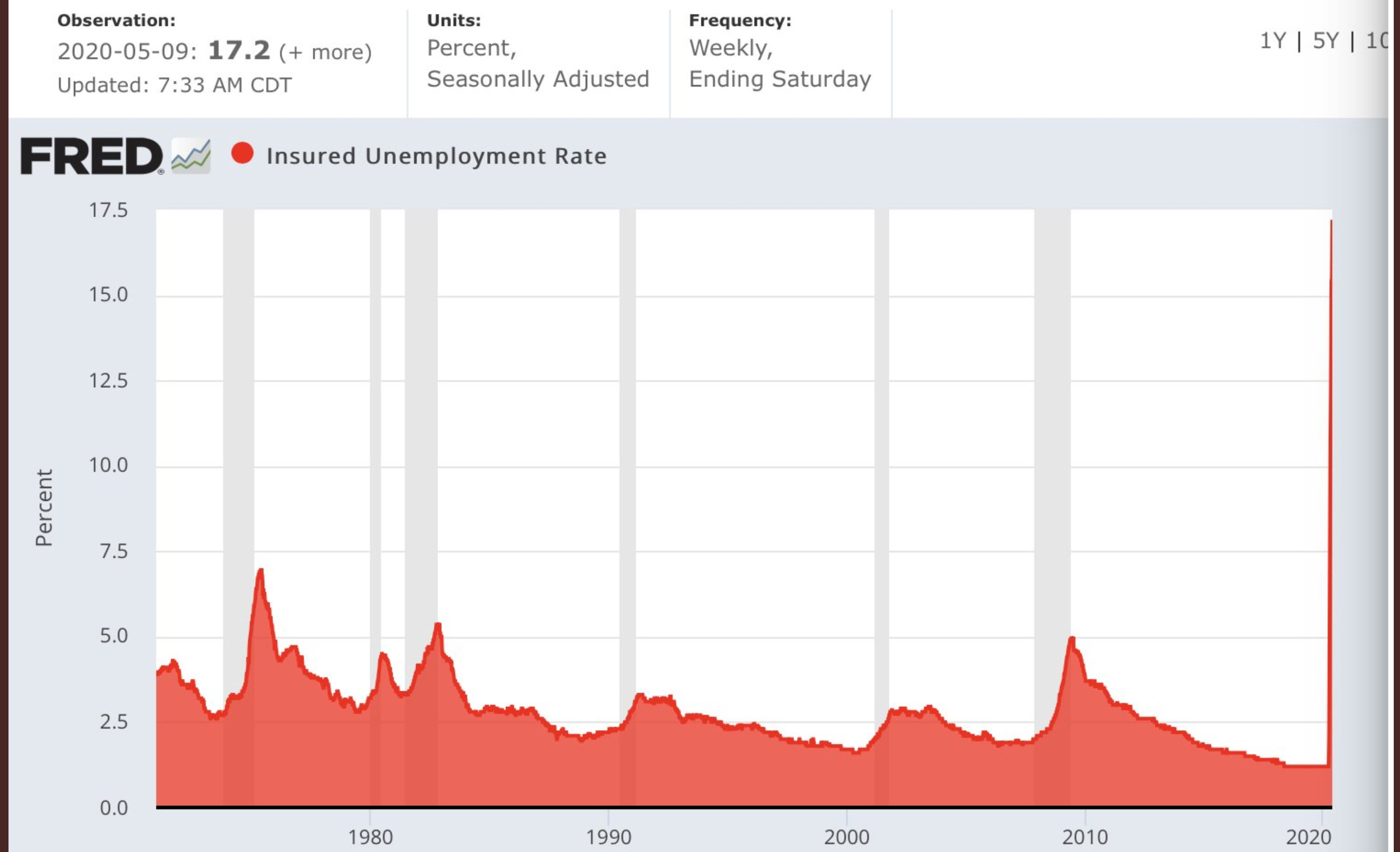